Laura Ethol Ross was a woman who faced many hardships in her life. She was born in Jersey County, Illinois on September 24, 1873 to James Ross and Mary Edith Luckey, their first child. Her parents were first cousins. The family would grow to include four younger brothers. When Laura was about 6 years-old, the family moved to Labette County, Kansas. Laura?s father purchased a farm outside of the town of Parsons, but died of pneumonia in 1884. Her mother then married a farmhand named Albert Leonartz and had three children by him. He was said to be strict with all of the children in the family. 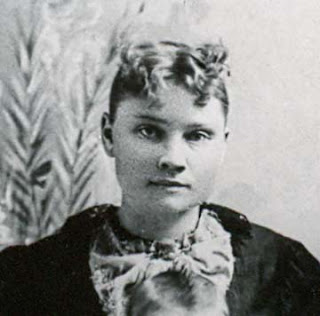 Laura Sheridan in about 1897
In 1893, Laura became pregnant out-of-wedlock; the child was born in October of that year and she named him Thomas. She would later tell her son that his biological father was named Thomas Carey. She claimed that she sued the man for child support when he refused to marry her and won $75. No evidence of a paternity suit has been found.

On March 6, 1895, Laura married a man named Howard Sheridan in Oswego, Kansas. The marriage record shows that Laura lived in a place called Idenbro, a tiny settlement southwest of Parsons which no longer exists. During the years after her marriage to Sheridan, the family moved several times between Kansas and Missouri, sometimes living on farms. Laura had three more sons (one died as an infant). Money was tight and it was said that one winter, the family had $6 to see them through to spring. On one of the farms where they lived, 5 year-old Thomas once tried to keep the runt of a litter of pigs as a pet. Laura encouraged him by telling him, ?Name it after somebody strong, and it will grow up to be strong.? So he named the pig "President McKinley." When Laura?s husband Howard found the boy with the pig, though, he got angry ? he took out his gun and shot it. 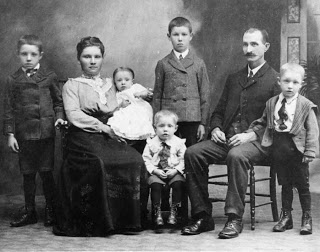 Sheridan family in 1905
Howard worked for the railroad and in 1900, he was transferred to the state of Washington. Around 1901, the family moved to a remote section of woods near a town called Lake Kapowsin, not far from Mt. Ranier. The tiny house where they lived was right next to the train tracks. During this time, Laura had two more sons. The family moved to the Tacoma area in about 1905 and in 1908, Laura had yet another boy. In 1910, she finally gave birth to a girl. 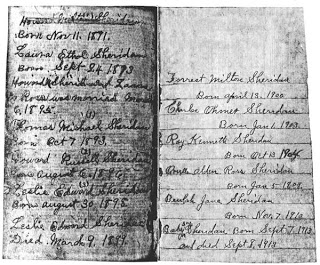 Laura's entries in her family Bible 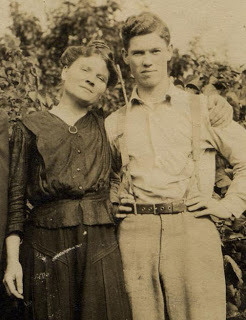 Laura and her son Thomas in about 1912
In 1913, Laura was pregnant again. When she gave birth, the labor was difficult and the baby boy lived only a day; he wasn't even given a name. Laura lost a lot of blood and became very weak. The doctor said, ?If you ever have a child again, you could die.? In about 1916, the Sheridan family moved to Los Angeles; it's unknown why they left Washington. Not long after settling in L.A., Laura became pregnant, and on March 17, 1917, she went into premature labor and bled to death. The baby, who would have been her ninth boy, was stillborn. Laura was buried in the Odd Fellows Cemetery in East Los Angeles.

- A Husband In Prison ? Ellen Ann Luckey
B. 1829 in Tennessee M. 3 Apr 1850 in Jersey County, Illinois Husband: John Ross D. 1882 in Labette County, Kansas Ellen Ann Luckey was born in Tennessee in 1829 to Joseph and Esther Luckey, probably as the two migrated from North Carolina to Missouri....

- The Long Life Of Grandma Luckey ? Mary Jane Davis
B. March 1834 in Jersey County, Illinois M. 7 Apr 1853 in Jerseyville, Illinois Husband: Samuel Luckey D: 7 May 1927 in Parsons, Kansas My grandfather, who was born in rural Kansas in 1893, once told me his earliest memories of his family. Every Sunday,...