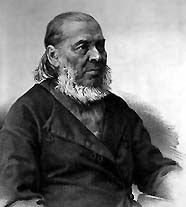 According to the Velvet Book, the Aksakovs trace their male line to a nephew of Haakon the Old, who settled in Novgorod in 1027. Sergey was born in Ufa, brought up in his family estate at Novo-Aksakovka, and educated in the Kazan University. Having taken part in the Campaign of 1812, he settled for a quiet life of sporting country squire in 1816. About two decades later, Aksakov moved to Moscow, where he joined the censorship department and started to publish his notes on hunting and fishing. These made him a national celebrity and won him a number of admirers, some of whom declared Aksakov superior not only to Gogol but even to Shakespeare.

In 1843 Aksakov settled in the village of Abramtsevo, which was also frequented by his Slavophile sons, Konstantin Aksakov and Ivan Aksakov. In the late 1850s he published his most enduring works, The Family Chronicle (1856) and Childhood Years of Grandson Bagrov (1858). These are reminiscences of a childhood spent in the Russian patriarchal family rather than a full-scale work of fiction. Aksakov's semi-autobiographical narratives are unmatched for their objective and detailed description of everyday life of Russian nobility.

For Quiz related to this author please visit Squareroot

- Victor Erofeyev
Victor Erofeyev (Russian: ?????? ???????; born 1947) is a Russian author, the son of a high-ranking Soviet diplomat (who worked closely with Stalin). He spent some of his childhood in Paris, which accounts for why much of his work has been translated...