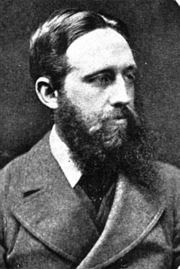 John Richard Jefferies (November 6, 1848 - August 14, 1887 ) was an English nature writer, essayist and journalist. He wrote fiction mainly based on farming and rural life.

He was born at Coate, near Swindon, Wiltshire, the son of a farmer. His birthplace and home is a museum open to the public. From early in life he showed a great love of the countryside, but was temperamentally unsuited to follow his father as a farmer, and in 1866 he found employment as a newspaper reporter for the North Wiltshire Herald and the Swindon Advertiser. In 1874, the year of his first published novel, The Scarlet Shawl, he married Jessie Baden, the daughter of a nearby farmer.

In late 1877, with Jessie and their baby son Harold, he moved to Surbiton (close to the Surrey-London boundary) to be nearer the hub of literary England. The Surbiton years were momentous. The couple's next child, a daughter called Jessie after her mother (but known by her second name, Phyllis), was born, and Jefferies began to make his name at last. His new surroundings defined him, both to himself and others, as a country writer. Articles drawing on Jefferies' Wiltshire experiences were snapped up by the Pall Mall Gazette, then published in book form as The Gamekeeper at Home in 1878, to be followed by similar collections of essays, like Wild Life in a Southern County (1879) and Round About a Great Estate (1880).

Also published in these years was the popular Wood Magic: A Fable (1881), introducing his child-hero, Bevis. Bevis itself came out in three volumes in 1882, the year in which he left Surbiton and, after a summer in Exmoor, settled for a while in Brighton.

About this time he wrote his extraordinary autobiography, The Story of My Heart (1883). He had been planning this work for seventeen years and, in his words, it was 'absolutely and unflinchingly true'. It was not an autobiography of the events of his life, but an outpouring of his deepest thoughts and feelings.

Articles about the Surbiton area were reprinted in the popular Nature Near London (1883), although the last chapters of the book refer to Beachy Head, Ditchling Beacon and other Sussex landmarks.

After London (1885) is of the type that could be best described as "post-apocalyptic fiction"; after some sudden and unspecified catastrophe has depopulated England, the countryside reverts to nature, and the few survivors to a quasi-medieval way of life. The first chapters consist solely of a loving description of nature reclaiming England: fields becoming overrun by forest, domesticated animals running wild, roads and towns becoming overgrown, the hated London reverting to lake and poisonous swampland. The rest of the story is a straightforward adventure/quest set many years later in the wild landscape and society; but the opening chapters set an example for many later science fiction stories.

He died in the Worthing suburb of Goring, having lived for some time in the town, and earlier in Eltham on the south-east fringes of London. He is buried in Broadwater Church in Worthing.

After his death, a number of posthumous collections were made of his writings previously published in newspapers and magazines, beginning with Field and Hedgerow (1889), edited by his widow. New collections have appeared over the century following his birth, but even now not all have been reprinted in book form.

In the days of his health, a tall, stooped, bearded figure trekking across country with his notebook in hand, Jefferies had been the very epitome of an English nature-loving eccentric. He continues to alert a dedicated band of readers to the small, unnoticed wonders that lie about us in our daily lives: "You do not know what you may find each day; perhaps you may only pick up a fallen feather, but it is beautiful, every filament. Always beautiful!".

RICHARD JEFFERIES : Selections of his Work with details of his Life and Circumstances, his Death and Immortality (1947)
Other writers who admired Jefferies included Edward Thomas (who wrote his biography), Leslie Paul, Ethel Mannin and Raymond Williams.


- William Morris
William Morris (March 24, 1834 ? October 3, 1896) was an English artist, writer, and socialist. He was one of the principal founders of the British Arts and Crafts movement, a pioneer of the socialist movement in Britain, and a writer of poetry and fiction....

- John Josselyn
John Josselyn (fl. 1638?1675) was a seventeenth-century English traveler to New England who wrote with credulity about what he saw and heard during his sojourn there before returning to England. Yet his books give some of the earliest and most complete...

- Thomas De Quincey
Thomas de Quincey (August 15, 1785 ? December 8, 1859) was an English author and intellectual, best known for his book Confessions of an English Opium-Eater (1822). Life and work [edit] Child and student He was born in Manchester, England. His father...