﻿ A Daughter and Wife of Preachers ? Nancy Sophia French
Biography

A Daughter and Wife of Preachers ? Nancy Sophia French

Religion was a backdrop to much of Nancy Sophia French's life. She was born on December 21, 1856 in Stockton Springs, Maine, into a deeply religious New England family which could trace its roots back to the early Puritan settlers. Her father, Reverend James Riddle French, was a minister who died three months after she was born. Her mother, Sophia Kittredge, had Nancy baptized just a few days after her father's funeral. As her mother wrote, "I had her baptised when our friends were assembled to look at the lifeless remains of her dear father.?Could her father have spoken, I doubt not he would have rejoiced." 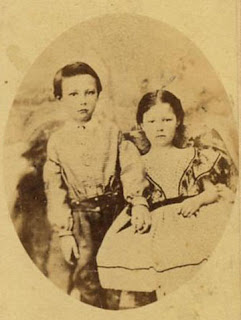 Nancy with brother James in about 1861
While still a small child, her mother put Nancy and her older brother, James, into the care of their grandfather Abel Kittredge in New Hampshire, and went off to school in Dorchester, Massachusetts. In 1860, Nancy was living in Boston with her grandfather and his family, while her mother lived at a nearby boarding school where she taught. Nancy seems to have been reunited with her mother in 1861 after the teaching job ended. Money was tight as her mother first ran a boardinghouse, then later worked as a city missionary. As she grew up in Boston, Nancy seems to have gotten a good education, and a school report she wrote on Alfred the Great has been passed down in the family. 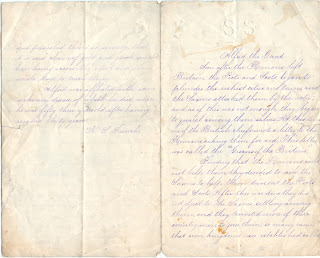 Nancy's school report on Alfred the Great
On July 17, 1879, Nancy married George Henry Hewes, an immigrant from Canada. Nancy's cousin, George Lyman Kittredge, later a very prominent professor at Harvard, was best man at the wedding. George and Nancy took her mother and grandfather into their home in Boston. In 1880, Nancy gave birth to a girl named Eleanor, then in about 1882, the family, including Nancy's mother, relocated to Le Mars, Iowa. Nancy had three children born in Le Mars ? Charles, Gertrude and Olive. In June 1885, a tornado damaged their house, moving it five feet off the foundation, and terrifying the family who sought shelter in the flooded basement. So they decided to leave Iowa and move further west. Nancy's brother, who had changed his name to "Frank Emerson," was living in Los Angeles and encouraged them to join him there.

The Hewes family arrived in Los Angeles in November of 1889. Frank took them in for a short time and helped George find work. Eventually they settled in an area just south of downtown Los Angeles and bought a house. There in 1894, Nancy gave birth to the last of her five children, Faith. George worked as a carriage maker, but on weekends became a preacher. His interest was in helping the poor, and with Nancy's heritage, she was probably also involved in his work. George started a settlement house, and by the turn of the century, was quite well known as a socialist. He even ran for Congress as a socialist candidate in 1902. 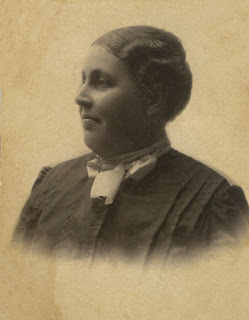 Nancy Hewes in about 1900
After 1904, George seems to have given up preaching and politics. Not long after, son Charles was accepted into the University of California at Berkeley, and Nancy and George decided to relocate the family there. They were there in time to experience the 1906 earthquake; although they suffered no damage, daughter Eleanor sent them a crate of supplies from Los Angeles to get them through a time of food shortages.

The Hewes family remained in Berkeley for several years after Charles graduated from college. Nancy died there from stomach cancer on July 12, 1916. She was buried in an unmarked grave at the Mountain View Cemetery in Oakland.