The entire heritage of George Henry Hewes was from the southwest of England, but he himself was from Charlottetown, Prince Edward Island. He was born there on October 17, 1853 to Charles Hughes and Maria Bevan, and was one of six children. When George was 4 years-old, the family entered the United States at Boston, and by 1858, settled in Whitewater, Wisconsin. George's father died sometime between 1860 and 1864, when his mother was listed living back in Charlottetown as a widow.

Records show that in 1870, George lived with his older brother Charles in South Boston. It's believed that about this time the family changed the spelling of the name from "Hughes" to "Hewes." George's brother was a carriage maker, and after he died in 1872, George took up that profession as well. He began to be listed in the Boston city directory in 1875, and the following year, his mother and younger brother James were listed there as well. 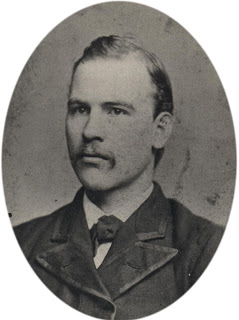 George Hewes in about 1875
By the end of the decade, George met a young woman named Nancy French and they were married on July 17, 1879. Between 1880 and 1894, George and Nancy had five children. Nancy's father had been a minister, and her widowed mother was involved in city missionary work. Mrs. French became part of George's household and remained with them until her death in 1900. Nancy?s grandfather, Abel Kittredge, also lived with them for a short time.

On October 14, 1880, George took the step of becoming a U.S. citizen. Within a couple of years, George took another big step and relocated his family out west. In about 1882, they moved to Le Mars, Iowa. On June 14, 1885, a tornado struck the town and damaged the Hewes house, moving it five feet off the foundation. The terrified family took refuge in the cellar, which was flooded, but nobody got hurt. This event had George rethink the decision to live in Iowa, and in November 1889, the family moved to Los Angeles.

Nancy's brother Frank, who already lived in Los Angeles, helped George find work as a carriage maker. The family eventually settled in an area south of downtown Los Angeles, known as "The Neighborhood," and George began doing minister work in his off hours. There is no record of him ever having been ordained by any religion. On evenings and weekends, he devoted himself to the down and out residents living around him, inviting people of all races and religions to benefit from his charity. At first he worked out of somebody else's kitchen; then within a few years, he built a settlement house which he called "The Church of the Neighborhood." His interests were in providing a free kindergarten for young children, and counseling young men, particularly those who were drifters.

George branched out into socialist politics and acquired some prominence in the city. In 1898, he spoke at a "mass meeting" of religious and socialist leaders. His speech was paraphrased in the Los Angeles Herald: "Competition must give place to cooperation. Socialism gives every man a right to live and work. If we do not change conditions there will come a revolution. People must have something to do. They believe there is no law for the poor and it must be true. The workingman must have a place or he must go down. Let us combine and make the Declaration of Independence a fact not a theory." 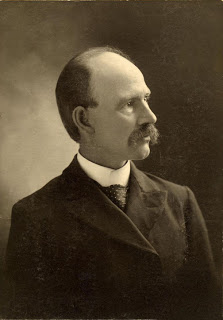 George in about 1900
Around the turn of the century, it appears that George gave up his day job to devote full time to his religious and political aspirations. In 1902, he put himself forward as candidate for president of the County Council of Labor. He was unsuccessful. Then in November, he ran for the U.S. Congress seat in Los Angeles County as a Socialist candidate. He won 4.2% of the vote, a total of 1,261 votes. By the end of 1904, though, his political activities appear to have come to an end. That year, he also turned over his settlement house to the Episcopil Church.

In 1905, George moved the family to Berkeley, where his only son, Charles, was a freshman at the University of California. George spent about 10 years in Berkeley. He watched as Charles graduated and moved away. The time in northern California ended in 1916 when George's wife Nancy died of cancer. Not wanting to live alone in his old age, he moved in with daughter Eleanor in Los Angeles.

All during this time, George continued working, transitioning from being a "carriage maker" to a "car body builder." His grandchildren who lived with him recalled he had a slight English accent and kept a Union Jack on the wall of his room, likely due to his ancestry. It was also said of him by his grandaughter, Maude Elwood, "Grandpa was a gentleman, but a pretty raunchy one at times, especially when he'd had a snortful." This suggested he liked to drink, at least at this time of his life. 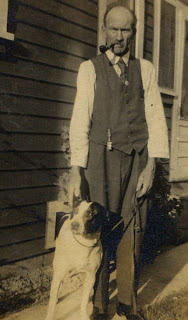 George with granddaughter Maudie's dog, Jack
In 1920, George began to have respiratory problems and sought a way to get out of the city for fresh air. So he bought a small lot in Tujunga, a hillside town just north of Los Angeles, and built a house for himself. The street where he lived became named after him: George Street (it was later renamed Wyngate Street when Tujunga became a part of Los Angeles). George died there on September 18, 1923 at age 69. The cause of death was described as "myocarditis," an inflammation of the heart. He was buried in an unmarked grave at Grand View Memorial Park in Glendale.