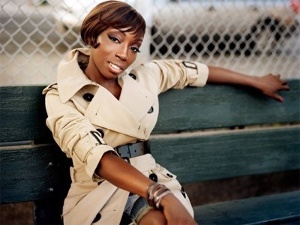 Estelle Swaray born 18th January 1980 to a Senegalese mother and a father from Grenada, she is most widely known as Estelle and formerly Est'elle, Estelle is a female British hip-hop artist and producer
who was born in West London.

Estelle is one of eight children of her parents, she is one of the most respected British female hip-hop artists in recent years, Estelle runs her own record label, Stellar Ents and has released her own material through this - including the two "Da Heat" mixtapes Part 1 and 2, the album The 18th Day and the singles "1980", "Free" and "Go Gone". She featured on Natasha Bedingfield's song "Drop Me In The Middle" for Natasha's USA release of Unwritten.

In 2005 Estelle revealed to great humour on the popular Sky Sports show "Soccer AM" that her birthname is actually "Fanta".

In 2006, Estelle appeared at the London School Harris City Technology College for a Post 16 Year Of Achievement Night, and she could also be seen in the video for John Legend's single "Save Room". Also in 2006, Estelle joined rapper Kardinal Offishall's Black Jays International, and was eventually signed to singer John Legend's soon-to-be-named label through Atlantic Records.

In 2008 Estelle released her second studio album Shine which was certified Gold in the UK. The lead single "Wait A Minute" failed to chart anywhere. The second single "American Boy" peaked at number one in the UK and also became Estelle's first song to chart in the US at a position of nine. The album released a further three singles. In 2012 Estelle released her third album All of Me. The lead single "Break My Heart" featured American rap artist Rick Ross, the single charted at number 30 on the US R&B Chart. The second single "Thankyou" peaked at 120 on the US Billboard and 22 on the US R&B chart and the third single "Back to Love" was released.

Estelle's work has earned her numerous awards and accolades, including one BET award, 2 MOBO awards, one UMA award, a World Music Award and also one Grammy for Best Rap/Sung Collaboration for "American Boy.

Her career got a jump-start in the early 2000s when she happened to see Kanye West sitting in a restaurant while on a trip to Los Angeles. Estelle approached Kanye, introduced herself and asked for an introduction to John Legend. She eventually got that introduction, and Legend eventually helped produce two songs on her debut album.

- Lemar
Lemar Obika born 4 April 1978, professionally known simply as Lemar, is an English R&B singer?songwriter and record producer. Lemar has had a run of chart success in the United Kingdom, Europe and Australia. He rose to fame after finishing in third...