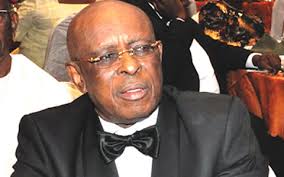 Olusegun Osoba was born on 15 July 1939 at Egbatedo Ogun State to Pa and Madam Jonathan Babatunde Osoba.
Osoba had his primary education at African Church School, Osogbo between 1947 and 1953. From there, he went to the
Apostolic Teachers Training College. He also attended Methodist Boys High School Lagos. Sponsored by the International Press Institute in 1965, he obtained a Diploma in Journalism from the University of Lagos. Thereafter, he went for a  one-year course in the United Kingdom on the scholarship of the Commonwealth Press Union in 1967. He did part of the program at Oxford University, Oxford, United Kingdom while the rest were at Bloomington, USA at the Indiana University's Department of Journalism in 1969. He did a postgraduate study at Harvard University Cambridge, Massachusetts, USA.
Prior to studying Journalism and becoming a journalist, Olusegun Osoba worked as a building inspector in Lagos. He however started his career in journalism in 1964 when he worked with Daily Times as a trainee reporter covering crime stories. In 1966, he became the diplomatic correspondent of the Times. In 1968, he became a news editor. By 1971, he was already a deputy editor of the Sunday Times, and deputy editor of the Times in 1972. In 1975, he became the Editor of the Daily Times of Nigeria, a news firm he left in November 1975 to take up the task of General Manager of the Nigerian Herald. In the year 1984, he returned to Times and became the managing director. He also worked as stringer or local correspondent for the following organizations: Newsweek Magazine, U.S.A , The British Broadcasting Corporation (BBC),The Times of London and the United Press International News Agency (UPI).
In 1992, Olusegun Osoba was elected as Governor of Ogun State, a position he held until November 1993 on the platform of Social Democratic Party (SDP). When Nigeria returned to democracy in 1999, he was elected again as governor on the platform of Alliance for Democracy (AD) and he held the office until May 2003.
Olusegun Osoba was at the helm of affairs of the following bodies:
the chairman of the Governing Board of the Nigerian Institute of Journalism;
member of the Executive Board of the International Press Institute representing Black-Africa from 1984-1992;
member of the Nigerian Constituent Assembly in 1988;
member of the Commonwealth Press Union, London and the Nigerian union of Journalist (NUJ).
Osoba is an Awardee of the Nigerian National Honor of the Commander of the Order of the Niger CON.
In the year 2014, He was a member of the National Conference.
Olusegun Osoba is Married to Beere Aderinsola and they have four children, two boys and two girls Kemi, Olumide, Oluyinka and Tobi.
Post

- Biography Of Florence Ita-giwa
Florence Ita Giwa was born on February 19, 1946 in Atabong, Bakassi LGA area of Cross River State. Florence attended the Kilburn Polytechnic in London, United Kingdom, where she studied for, and became a nurse. After she graduated as a nurse, she became...